Download Indie Film Distribution Through the Decades with Sam Sherman

Sam Sherman attended New York’s City College Film Institute, where he ran “Flash Gordon” serials and “The Mask of Fu Mancho” in the student film program and made the 16mm short “The Weird Stranger” in a single day. The first picture he distributed was a re-release of The Scarlet Letter (1934) in 1964. He also worked in the publicity department of Hemisphere Pictures prior to forming the hugely successful production and distribution outfit Independent-International Pictures with Do-It-Yourself indie filmmaker ‘Al Adamson (I)’ in 1968. Independent-International produced and/or released a slew of movies in such genres as horror, Western, science fiction, comedy, action and even blaxploitation for the drive-in market throughout the 1960s, 1970s and 1980s.

I’ve been in contention with the major studios from the beginning. When I realized that I was not going to be involved with them. I wanted to be originally it made me declare my oath of independence. My opinion is they are to blame for everything that’s happened in this industry. As a result of the stupid things they’ve done the major studios have hurt the whole industry.

In the past year Paramount and Warner Bros fired a third of their employees on the west coast. They employ a lot of people that effects the economy out in Hollywood. As far as young people I try to encourage young film makers because when I started out I met veteran people in the industry. Whether it was Otto Preminger or John Wayne, they were always very nice to me and encouraged me. So I always want to encourage the next crew coming up.

It’s tougher today than it was because it’s tough to get into the major studios. They control 95% of the major theatrical market. When I look back the independents used to control 35% of the market. They hated to see when we were making all the money and they weren’t. We were making more horrific or sexy pictures and the studios were making old fashioned movies. The studios didn’t grow with the changes in the marketplace.  But they are certainly smart. When someone picks up on an idea such as Blair Witch or Paranormal Activity which is an awful picture. I had to walk out on it. It was a waste of time, yet there were 2 or 3 sequels and made mega millions of dollars. You can’t possibly understand why that is or even be influenced by it because its so freakish and impossible.

It’s like The Boob Tube (1975) in a way. As much as that was influenced by a movie called the The Groove Tube,  no matter what we tried to do to clone the Boob Tube we couldn’t do it. If you looked at Paranormal Activity and said that’s a great idea I’ll make a picture like it, you can’t. It’s just so weird and freakish that nobody has succeeded in copying it.

If you look at what pictures the majors are making today, they’re big production pictures like Batman vs Superman based on comic books or it’s a big Tom Hanks movie. They are well directed, shot all over the world. These pictures are costing $100 million dollars or more. It means film making is a very hard thing. Is it impossible? No, but one has to realize, especially young film makers that the cards are stacked against you.

At the time when I started out, it wasn’t an industry that didn’t want me. They didn’t care one way or the other about me. Couldn’t care less whether or not I wanted to do something. Today they don’t want you at all. You have to look at what is going on.

Today we are seeing things change so amazingly fast. We’ve seen the growth of the internet and internet programming. Not even the studios know where its going. One thing we can look at is where the stocks are going. Companies like Alphabet, Inc. that own Google and YouTube, their stock is worth over $900 per share. Amazon stock is over $900 per share. Disney owns studios, two theme parks and a great library of movies. Disney is a great company with branded entertainment and their stock is probably $30 per share. Who would believe that?

I can only give one piece of advice and that’s my credo. Never give up!

Tell us about your partner and director Al Adamson

I suggested you look at the film Nurse Sherri. Nurse Sherri was made for as next to nothing as it could be. I said to my director Al Adamson we have no money to pay you now but we have money that’s due. Go out and put a second mortgage on your house and we’ll do this picture. Who would do that?

Unfortunately if you know the story of Al Adamson he was sadly murdered. Al Adamson was like my brother. We started this company together and made all these films and did a lot of great things. Al was murdered by a man who was rebuilding his home in Indio, CA south of Palm Springs. It was a great tragedy. He went missing for a long time, we went looking for him and brought in the police and FBI. Eventually he was found entombed in his house.

Six months before he died he said something to me that was so strange. We had a little gag where I’d ask Al to do something for me and he’d ask what is it and I’d say I’m not telling you. You have to agree first. Who would do that? What a relationship we had. Only once did Al say to me he had something he wanted me to do. He made me agree first and said I want you to do three things. First I want you to tell my story to the world, what I’ve directed and my career. Number two I want you to keep the films that I directed in distribution so that people can see them. Number three I want you to finish the UFO film we were working on. I haven’t finished that film which bothers me especially because I gave my word on it.

In the case of tell his story to the world I worked on a book called Schlock-O-Rama The Films of Al Adamson by David Konow. It’s a great book that tells the whole story of this. Then we had an E! True Hollywood Story about Al. I was following the background of Ed Wood. He had a book written about him, then he had a documentary done about him and then he had a movie done about him. We are working on a movie about Al and myself making films together for a number of years.

How did you make Dracula vs Frankenstein? 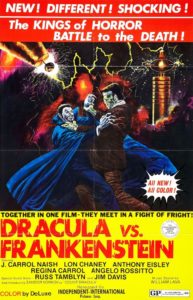 was very popular. It went through several levels of shooting and edits. It started as a spinoff of Satan’s Sadists with some of the same people involved and it was originally called The Blood Seekers. The picture was rushed into production and Al wasn’t really ready but he was being pushed by other people. Al sent us the work print for a screening in New York with myself and some investors. Everyone hated it. They said better to take your first loss early, we don’t want to release this film.

I asked if they would mind if I tried to fix this thing up with my background as a film editor and writer. I belong to the school of waste not, want not. The main doctor was played by J. Carrol Naish, a two time Academy Award Nominee and 5 or 6 other well known actors in it. A concept had come to me that Dr. Durray, at least that’s what he called himself, was actually Dr. Frankstein, the last of the Frankensteins. I decide to change the picture in that direction. If we could put Frankenstein in, we could put Dracula in for good measure. I had to find a good editor to fix up the original material and then re-shoot the whole thing into what became Dracula vs Frankenstein.

The film is still around, still playing, it’s just now on Blu-Ray and wentthrough TV distributors MGM Studios. It’s one of those weird things. It became a great cult film. There are producers also working with us to remake it.

What’s in the future for Independent International Films?

Continuing to keep our library in release. Making new films, working with young film makers and encouraging them while figuring out a way to deal with this stranger market that exists today.

How did you get films into distribution?

We came in off the street and didn’t know anything. I had one film, The Scarlett Letter that I brought to a regional distributor in Boston that don’t exist anymore. There were probably 500 regional distributors around the country at that time. Denver Dickson, Al Adamson’s father knew some of them in the south from distributing a Western him and Al had made called Half Way to Hell which helped but he didn’t know every area.

What’s different or the same about film making today?

Number one, the thing that’s always interesting to me is how cheaply can you make a film. At the time if you were shooting a film on 35mm if nobody else got paid, you still had to pay for the film stock, the lab to develop it. Today you don’t have that. Back then we had films shot in 16mm and blown up to 35mm because that would cut the cost up front way down. Satan Sadists was shot in 16mm. Dracula vs Frankenstein was shot in 16mm. Pictures that were popular were shot on 16mm but I didn’t like that. I wanted to shoot on 35mm. Today digital is digital. It doesn’t have to cost anything.

The one thing all movies have in common and that’s the secret. That great thing is ideas. Ideas are more important than money. If you have a picture that costs $400 million dollars and it was stupid idea who cares. If you shot it on digital and it cost zero dollars but the idea was great.

How do you protect your ideas?

Anybody can steal anything or change it a little bit. The one thing you can do that costs nothing is the Writers guild of America allows you to register written materials with them. You can take a script, a story, a one page idea and register it for free with the Writers Guild. That’s respected in this industry everywhere.

This site uses Akismet to reduce spam. Learn how your comment data is processed.